“WHO AM I? I AM NOT WHAT EVERYONE THINKS I AM … IF NO ONE SEES YOU,
DO YOU STILL EXIST”
Akwaeke Emezi

This performance focuses on the body, not only as an expressive form, but as a political tool. It is an intimate investigation that reflects on identity, an emotional journey between light and shade capable of transforming the body/object into meaning; a show designed to spark reflection on gender issues.
Through the dramaturgical use of music, BLUE MOON creates distinct tableaus, which are at times poetic, at times grotesque or ironic, united by a single thread: a deeply intimate dialogue with one’s own body.
BLUE MOON is the story of transformation, a rebirth that draws its source of expressive energy from music and dance. The body as the centre of the performance, a narrative body, like a living work of art, which cuts through the storyline in an organic and sensorial stream, undermining the idea of gender and bringing the knowledge of one’s own body back to existential rebellion, diversity and opposition.

To the elegant notes of a piano, an image emerges from the darkness on stage and starts to tell its story to the melody of the song “Blue Moon”. This show makes use of live music in order to open up spaces for reflection and poetic and dramaturgical suspension, but at the same time, transports the viewer to different scenes with the task of narrating the story of an entire life.
Childhood and the relationship with a body that does not feel like it belongs to its owner: HoliDolores (our protagonist) leads us into her story which is the story of many people, the story of the search for oneself, of a body that properly represents her.
A mechanical dance and her childhood memories: suddenly two dolls appear, a girl and a boy, who take centre stage and who will follow the story as imaginary spectators: it seems as if the piece is dedicated to them.
“Mum, am I a boy or a girl?”. The question becomes a gesture, a movement, and through the syncopated musical score, we are plunged into a sequence of jump-cut images, like someone using a remote to flick through the channels on their TV, depicting a number of gender stereotypes.
“Memories transport us into a vortex of disconnected images that, like waves, crash on our bodies”.
Next, it is time to tell the story of the first introduction to the pleasure and wonder of the cinema and the fabulous divas who live there… “I want to be like that!”
But the comparison with a reality that imprisons her in a body she does not want – “You’re a boy. Put those dolls away!” – brings us back to real life and the dualism that pervades the society that surrounds us.
This leads to the construction of a life filled with imagination and fantasy, where she can finally be a princess: a dreamlike waltz danced with a mannequin prince who embodies all her imaginary stories.
And then there is the discovery of sex, which opens the scene with a grotesque dance, a merry-go-round of passionate, furtive, anonymous and exasperated encounters.
But, eventually, she encounters true love and the desire to be herself, to finally exist as who she is, an encounter that allows HoliDolores to discover new possibilities, new paths.
And in the end, there is a new beginning: the journey of transition.
A story that speaks to us of hope, of a path towards self-knowledge, self-acceptance and the joy of being the person you have always wanted to be.

MUSIC:
The music, with original arrangements for the show, was created by Luca Longobardi and Matteo D’Incà and it was developed by taking one question as a starting point: how can you create soundscapes that are profoundly linked to the meanings found in a very personal, intimate story? Can music help lead the spectator and, through live action, create imagery in the minds of the audience?
Research on electronic and non-electronic sounds, along with a careful blend of past and contemporary melodies, has given life to a show that is both a concert and a personal narrative through music at one and the same time.

IMAGES AND VIDEO:
The use of video projections is influenced by the balance between a variety of media. Closely linked with the dramaturgical structure, video projections are an integral part of the show, as is the music. The projected images invade various spaces, playing with the concept of solid and void as it strikes the scenery on stage – the images seem to fragment, transform and multiply.
At the same time, these images become like graphic art, leaving an indelible mark that engraves the story of a life, words etched in the memory.

SCENERY:
Plexiglass is the material used for the scenery created for the show. Its delicacy, lightness and vulnerability is closely connected to the representative core of the show itself, at its very essence. The various modules that are manipulated on stage delineate architectural shapes and create performative spaces that constantly bring us back to the suspension of the story.
This material becomes an integral part of the performance, a symbol, a diegetic element.

CORRIERE DELLA SERA – Rome – Italy
“A colourful and tongue-in-cheek universe of images that interact with other images, of songs that become stories, of voices torn from one context only to be made blossom brighter than before in another.”

METRO – Italy
“A moment to reflect on issues related to inclusion…” 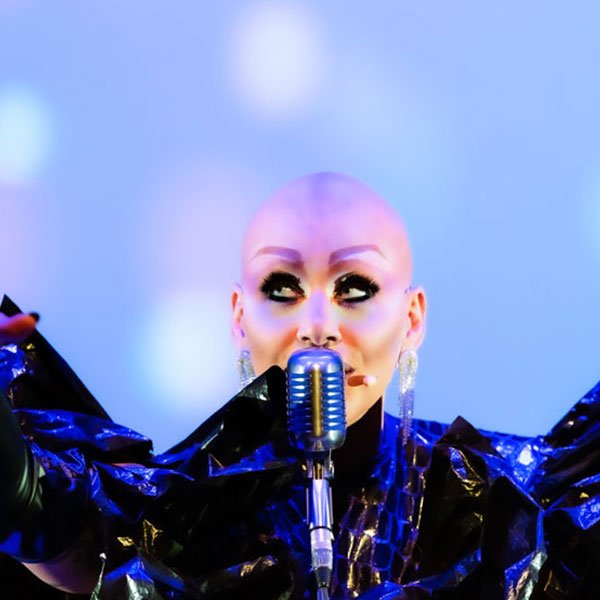 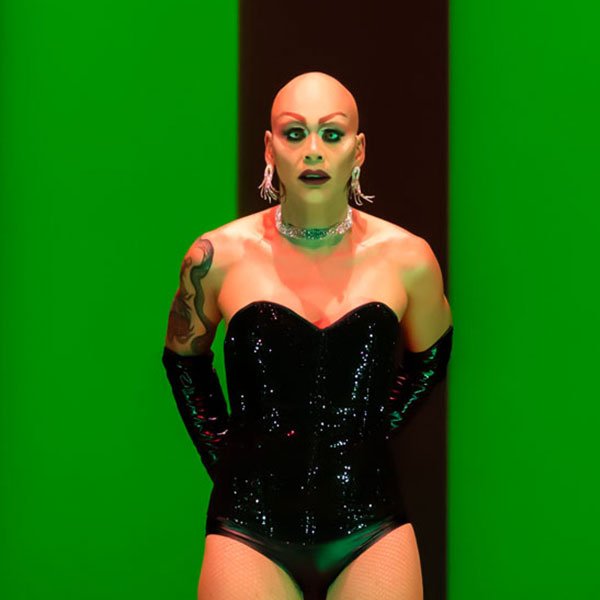