“MANKIND CAN KEEP ALIVE THANKS TO ITS BRILLIANCE
IN KEEPING ITS HUMANITY REPRESSED.”
Bertolt Brecht

With the taste for paradox and provocation that is typical of the language of drag, this show investigates the corruptibility of man and the relationship between morality and money, between love and power. Three drag queens take us on a journey that reveals the contradictions and hypocrisies in our society, merging the world of drag with the theatrical realm of the variety show, cabaret and physical theatre.
The title is a nod to the works of Bertolt Brecht and Kurt Weill, who were both instrumental in creating a new artistic language, where political and civil protest are combined with the carefree (albeit only at first glance) musical appeal of cabaret.
Drag shows today, just like cabaret in the past, combine irony and pop culture with satirical stabs at all the prejudices, falsehoods and social impositions that are typical of contemporary society; in particular, when it comes to issues related to gender roles, which are mocked and distorted through the art of drag, to help reveal their true nature as a social construct.
The artistic and expressive force of the art of drag in CABARECHT means the show is able to communicate with a varied and international audience.

A tulle curtain covers the stage. The melancholy sound of an accordion and 3 figures, like three Greek “Graces”, who appear to have stepped out of a mythological tale, sing and introduce us to a timeless era, a story from another time, which is not so very far away from our own.

Suddenly, the setting changes: to the light-hearted and dynamic notes of the song “Puttin ‘On The Ritz”, just like in a variety show from the past, through video projections and a flurry of sequins, our three guides appear clearly: Hope Nomore, Faith Faker and Charity Lost, three drag queens who delineate the space on stage through a dynamic and playful choreography routine. In CABARECHT, the names chosen represent the contradictions, disillusions and hypocrisies that are personified in our protagonists.

The setting turns around once more, an imperious voice (voice off stage) calls our drag queens to order. The Voice, perhaps a Goddess, a Big Brother figure, or simply the voice of the Internet, invites our hosts to introduce themselves to the public and quickly start what they were called to do: sing about humanity.

Three songs from the tradition of cabaret and the 1930s variety show, that playfully examine the eternally controversial relationship between mankind and money. The scene turns into the front stage of a theatre in 1930s Berlin.

It is “The Voice” (voice off stage) that interrupts everything by scolding Hope, Faith and Charity.

To the notes of “Falling in love again” by Marlene Dietrich “The Voice” introduces the next scene. The space is modified to the melancholic and persuasive notes of a passage of music taken from the Italian song, “L’Angelo Azzurro”. The music becomes a passionate Tango and the three drag queens slowly fade away. The projected video becomes the protagonist.

A woman is at the centre of this tableau.

The stage is now cluttered with chairs, three characters enter, reminiscent of old-time brothel madams. These three figures will tell the stories of women, through musical moments, to the public. Tales of women who are loved, women who are possessed and often exploited, women who are killed by their own man.

The scene comes to an end to the notes of Antonio Vivaldi’s “Sposa son disprezzata”: a giant structure/skirt, a desperate dance that gives voice, through carefully choreographed movements, to the suffocated cry for help of every woman who has been a victim of abuse and violence.

Images of beautifully made up, coiffed and primped women, depicted as objects of desire, are dissected and placed alongside images of beaten and abused women. Glamorous beauty make-up juxtaposed with a bruise, lipstick with a livid swelling, fishnet stockings with bandages.

The stage is transformed again by the three protagonists so we can explore the next scene: Power.

Moving panels, manipulated by our performers, create a choreographed interlude that fragments our view of the stage, captures our attention and, at times, shifts our focus on to images of war and destruction.

In the finale, “The Voice” takes the reins of the show, getting ready to reveal the moral of the entire show. Hope, Faith and Charity slowly undress and listen to what “She” is saying. When She is about to arrive at the true meaning, the resolution of all the problems, the three drag queens suddenly pull the plug and “The Voice” abruptly stops, leaving her speech unfinished.

The lights go out.

Closely linked with the dramaturgical structure, video projections are an integral part of the show, just like the music, performers and stage machinery. These video projections make use of different scenographic spaces that take advantage of both solid surfaces and voids in the scenery, so the images appear to be dismantled, transformed and multiplied. The projected images create virtual scenes that are in continuous transformation through movement.
These video projections are sometimes on a fixed screen but also on the bodies of the performers or the panels they manipulate through their choreographed movements on stage, creating dynamic projections in motion.

Taking its cue from the repertoire of ballads from the 1930s and 40s, linked with contemporary pieces and electronic sounds, the music completes the relationship between the different media, as does the scenographic structures and video projections.

The songs used are taken from the provocative ballads of Bertolt Brecht and Kurt Weill, songs that have been presented in a new and captivating guise for the occasion, specifically re-arranged with contemporary sounds.

The vintage flavour of the whole soundtrack, offset by original arrangements for the show, gives life to a composition that becomes a real dramaturgical element.

The layout of the entire stage design moves around a central core of scenery made up of steps. These create different levels of action on stage.

The space of the stage itself becomes a structural element, punctuated by flat surfaces and different levels, passageways, solids and voids. It is a communicative space which, thanks to the live movement of the performers on stage, who are both actors and set manipulators at the same time, constantly characterises the show.

TROVAROMA – Italy
A mix of comedy and poems by Bertolt Brecht and Kurt Wail, writers who were capable of stimulating the birth of new languages of political and social controversy, blended with the carefree air of a variety show, starring Karma B and HoliDolores.

GAY.it – online
An artistic ensemble that unveils a colourful and ironic universe to the public […] A journey that reveals the contradictions and hypocrisies of contemporary society.

Produced by: Ondadurto Teatro
Co-Produced by: DRAG ME UP – Queer Art Festival
Actors and technicians: 5 people
Duration: Approximate 65 minutes
Location: Suitable for theatrical halls and unconventional locations.
Language: Use of voice off stage – Translated into the language of the country to be performed in
Techniques: Drag Show / Physical Theatre / Dance
Ideal layout: Frontal / Semi-circular
Target audience: suitable for all age groups 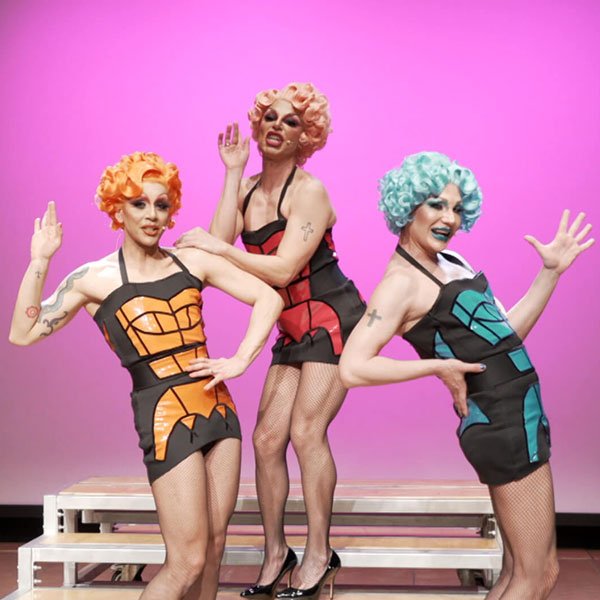 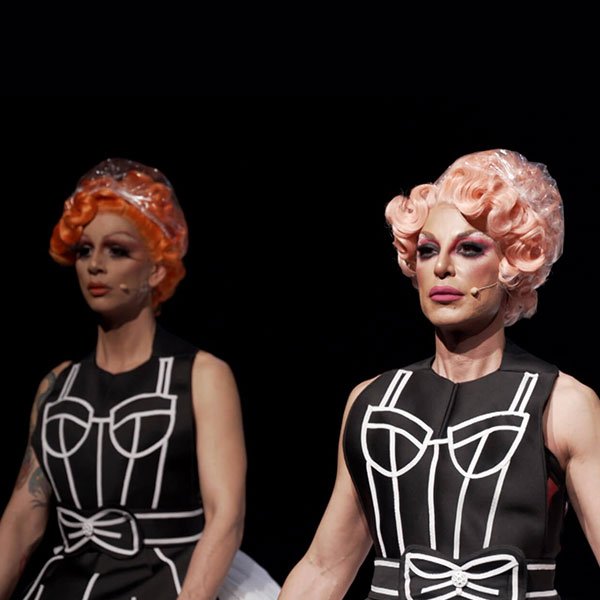 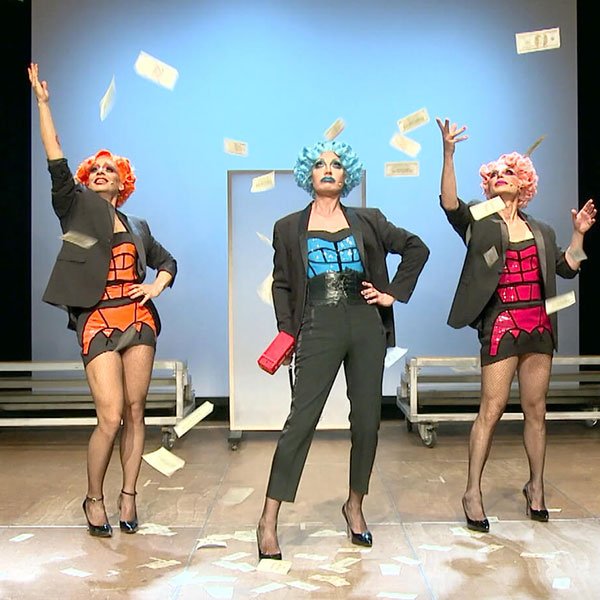 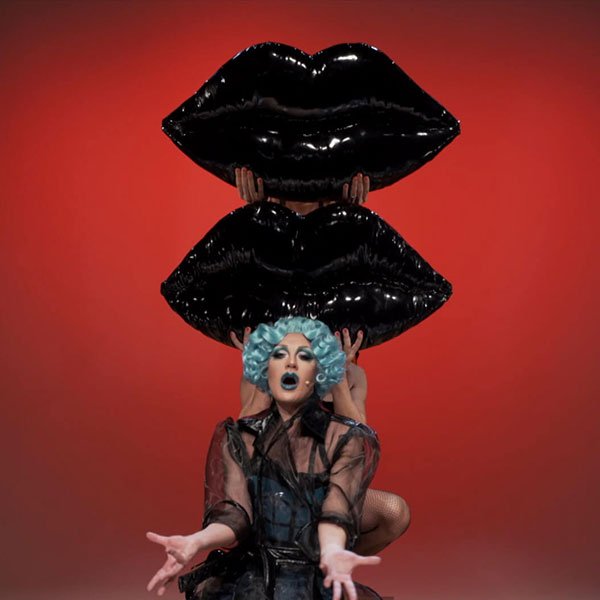