“Once upon a time—it was and it was not so,
as the old stories used to say,
it happened and it never did
—maybe, then, or maybe not.”
from Salman Rushdie’s The Satanic Verses

This project is based on the evolution and transformation of a show into something unique and surprising: welcome ladies and gentlemen to the era of the digital-physical show, a fantastic, surreal and surprising world.

This production has its roots in a show that was devised specifically for the international stage, which captivated a variety of audiences and connected with adults and children alike.

A 360-degree 3D VR immersive experience: a surprising project in which the spectators find themselves unexpectedly centre stage, totally surrounded by the action, in an experience featuring large, moving machinery and spectacular effects, creating a VR show with great emotional impact.

This show is much more than just a story about princesses and heroes. The traditional fairytale imagery, which we are used to seeing in all its saccharine mawkishness, is thrown into disorder, to the point that the boundaries between Good and Evil become blurred. Well-known stories, legends and fairytales from the literary traditions of great authors, including Lewis Carroll, the Brothers Grimm, Johann Karl August Musäus and Hans Christian Andersen, have been reinterpreted in a noir atmosphere with a “bittersweet” air.

Could Little Red Riding Hood have a dark side? And why can’t a Witch or a Stepmother have a good, sweet-natured or even melancholy side?

C’ERA UNA VOLTA / a VR experience is a colourful and enchanting revue show, a multidisciplinary work featuring moving scenery and large machinery, water effects and technological influences, which all work together to create an evocative experience for the audience.

It is a contemporary work that shakes up old traditions by stripping away the “sugar-coated” essence of the fairy tale, creating a highly digital technological experience, which seamlessly blends together and blurs the edges between LIVE performance and VIRTUAL reality.

Cast and crew: 2/3 on tour (1 performer)
Running time: approximately 60 minutes
Venue: any outdoor or indoor space
Language: NO TEXT >> non-verbal show
Techniques: VR (Virtual Reality) Theatre
Ideal situation: It can accommodate an audience of 60/100 people. The show can be repeated several times a day. Between one performance and the next, it takes about 3 hours to sanitise the venue/equipment and to recharge the VR visors.

Target: Any. Suitable for an international audience

THE SHOW IN PRACTICE

In the show, we will use:

Strictly speaking, the virtual world is a suitable environment for artificial life, which can be used to experiment with new forms of communication and interaction with the spectator.

A single performer will guide the audience in this virtual experience, where everything focuses on the relationship between two main concepts: presence and immersion.

The first term defines the level of psychological realism that the public experience from their interaction with the virtual world, in the instantaneous relationship created with the environment around them and the coherence of how it changes and interacts with the individual in comparison with their preconceived expectations.

For example, if you let go of an object, you expect it to fall to the ground rather than float in the air. If this were not to happen, your sense of presence in the virtual environment would be lost. In the same way, the same thing occurs in the dream world where, as long as the sense of presence is maintained, we cannot distinguish dreams from reality.

From the point of view of perception, the term “immersion” refers to the ability of a given virtual environment to directly engage with the senses of the individual, isolating them from the stimuli of the external – “real” – world. From a psychological point of view, immersion is achieved through engagement with and the use of the individual’s cognitive resources.

Through the use of virtual reality, the role of the spectator, the actor and the very nature of the show itself undergo a radical transformation. The key feature of this transformation is the fact that the spectator’s body is brought into play. The experience exploits the human body’s primordial characteristics as a tool used to explore and understand the world and converts these features to aid in the creation of a network of intellectual and emotional relationships with images, sounds, vibrations and smells, which spectators will perceive all around them in a completely immersive, multi-sensory experience.

ONCE UPON A TIME / a VR experience: come with us, directly into the heart of the performative experience, into a universe that is sure to be eye-opening.

MACHINERY:
The use of machinery and objects in movement follows on from and develops the research conducted by the company during all its previous performances.
The set design concept revolves around a set of stairs, which create various levels on the stage: a series of different shaped stairs, positioned as if they were being examined from different points of view.
Each part, taken separately, is perfectly realistic and consistent, but considered as a whole, they seem impossible and even made up of contradictions. These stairs can be seen as the symbol of the link between various states of being.
Connected to this is the idea of up and down, of movement and the hierarchy between the different levels; space itself becomes a structure that is articulated by various planes, steps and the interplay of solid and void. This expressive space is a cohesive characteristic of the show – the space is moved and transformed by the live action of the performers on stage, who, therefore, become both actors and manipulators at the same time. The show also features moving screens, a tower structure, an iron dress, a flying Vespa, a large mechanical clock, a unicycle that pulls a sitting room along behind it, and a water fountain.

VIDEO IMAGES AND GRAPHICS:
The choice of using video and projected images is connected to the search for balance between the various media.
Closely related to the dramaturgical structure, video is an essential part of the show, as is the music, actors and machinery / objects in movement.
These projections invade the different spaces. Thus, there are a variety of surfaces which can display images, creating solids and voids, which are then disassembled and recomposed, transformed and multiplied.
Words, lettering and video effects become the virtual background, which is constantly changing: these are no longer fixed images on static screens, but dynamic projections in movement.

SOUNDTRACK:
Taking its cue from the vast repertoire of the most famous Italian “songs” from the 1940s, and from Ennio Morricone’s masterpieces, mixed with contemporary music and electronic sounds, the soundtrack completes the relationship between the different media, as do the mechanical objects and video projections.
The vintage flavour of the soundtrack is offset by songs composed especially for the show: a composition that becomes a true dramatic element. 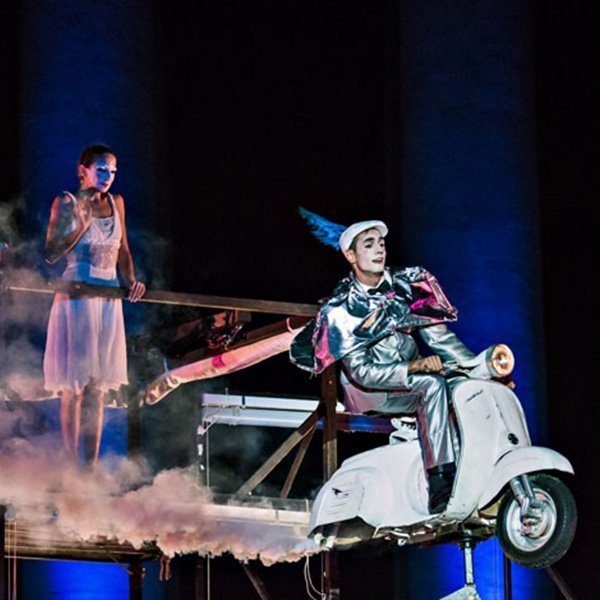 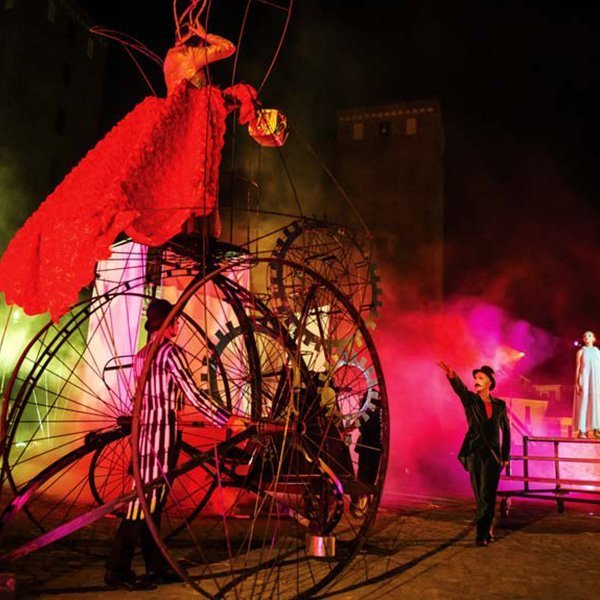 Are you interested in our shows and want to learn more? Write us a message and we’ll get back to you as soon as possible.
CONTACT US